Back in the analog pre-Internets days it’s hard to overstate how important mixtapes were.

Whether they were for your friends in order to introduce them to new music or for long drives on lazy summer days, or (infinitely more importantly) whether they were to try to impress that One Special Girl to whom you had So Much To Tell but was afraid to speak to, mixtapes were a labor of love 45 minutes to a side.

They took a while to make because you were dubbing in real-time (hi-speed dubbing cut down on the cassette tape audio quality which seemed so important at the time) which gave you time to think about both the songs and the person for whom you were making it (did I mention that One Special Girl?) and of course there was the cramped writing that you had to do on the cassette insert in block cap letters. It was desperately important that the lettering be in block cap letters for reasons that now escape me.

When CDs supplanted mixtapes the idea was still the same, although the process was much faster because you were just burning a playlist to disk. They seemed more disposable and less a labor of love but they were still fun.

Before streaming services the idea had sort of gone out of style unless you wanted to e-mail a bunch of files to accompany a playlist or were a rapper “poppin’ the trunk” but now that streaming services are common I think it’s time to resurrect the mixtape for the streaming age.

Several “One Special Girls” have come and gone, but the fun of making mixtapes remains.  They may be just Spotify playlists now, but to me they’ll always be mixtapes.  Here’s one for March 2015 with mostly recent stuff. Throw it in a playlist in Spotify and see what you think. Enjoy!

4. James Bay – Hold Back The River

8. Florence & The Machine – What Kind Of Man

9. Andrew McMahon In The Wilderness – Cecilia And The Satellite

The Race For Space puts a soundtrack to the 1960s & 70s space race heyday using broadcasts from the time.  All the major firsts are covered – first launch, first man in space, first woman in space, space walk, lunar orbit and lunar landing. The soundtrack is largely electronic with virtually no vocals other than the broadcasts themselves.

The tracks are in chronological order starting off with The Race For Space, which takes JFK’s “We choose to go to the moon” speech and puts it to a heavenly chorus that sounds like the voice of space itself. Sputnik is next, with a hypnotic electronic beat and synths which build and build to a crescendo, adding in layers of sound and crashing drums along the way.

The first single from the album, Gargarin, sounds slightly out of place, with its funky guitar and brass. As a standalone track it worked well, but it disturbs the mood of the album somewhat, in particular because the following track Fire In The Cockpit is a very sombre affair which covers the Apollo 1 fire which killed three astronauts.

Right in the middle of the album are two tracks which perfectly capture the mood of the events they recount – E.V.A. which covers the first man to walk in space, and The Other Side, about the first manned lunar orbit. You can feel the tension and then the joy as each mission is successful.

Valentina is clearly about the first woman in space, but is the only track that doesn’t use any broadcasts from the event. Instead it is a largely instrumental guitar track, with the only vocal being an evolving chorus of the name ‘Valentina’.

The album ends on two tracks which cover the lunar landings. Go! cleverly focus on the landing, rather than the first moon walk, and Tomorrow completes the race for space with the final departure from the moon by the Apollo 17 mission.

So, an early contender for album of 2015, and even if electronic music is not your thing, it’s at least a good history lesson.

Forty years on, Los Lobos have not only survived, they still howl.

There is something noble about seeing a professional working band in the October of their careers, especially a band as great as Los Lobos.   Their brilliant 1984 major label debut asked the question “How Will The Wolf Survive” and the answer 31 years later is “quite nicely, thank you”.

Los Lobos have constructed a career out of constant touring and remain consummate musicians, able to turn on a dime from roots-Americana to roadhouse blues to jazz to Norteno to jamband riff-rock. To me Los Lobos are the consummate American band, and possibly one of the most underrated American bands of all time. I’ve never seen a band proficient in so many different styles and moods.

I have seen them live on the order of twenty times in their career going back to the mid-80s when they were part of the Los Angeles roots and punk scene, opening for bands as diverse as the Blasters, X and Black Flag. I can honestly say I’ve never seen two Los Lobos shows that were alike.   I have seen them play their 1987 fluke #1 US hit “La Bamba” three times in a show in three different styles, some shows where they don’t play it all; some shows where they stuck to Norteno music, some where they played nothing but blues, some where they played mostly covers including Grateful Dead songs.

Formed in 1973 but not coming into national recognition until 1983’s “…And A Time To Dance”, Los Lobos has kept the same set of four musicians for that entire time: David Hidalgo on guitar and accordion, the sunglasses-clad Cesar Rosas on guitar, Louie Perez on guitar, Conrad Lozano on bass, all of whom met in high school in East Los Angeles. Saxophone, flute and keyboards virtuoso Steve Berlin jumped over from the Blasters to Los Lobos 1984 to complete the core band that has now held constant for three decades. 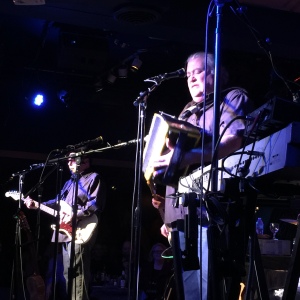 But it’s really their live shows where Los Lobos has made their career. They play without a setlist (or a net, for that matter). It appears that they tend to know what the first two or three songs of a set are going to be and then they feed off the crowd and depending on how the crowd responds they move off in that direction. Sometimes their shows are merely very good, sometimes they are brilliant with moments of musical transcendence, especially when Hidalgo is feeling inspired.

Hidalgo and Rosas trade off vocals from song to song, with Rosas doing more of the Norteno and gruffer blues vocals and Hidalgo’s heartbreaking tenor voice carrying off the more poignant ballads and mid-tempo numbers. Hidalgo is an amazing soloist on guitar and accordion and as a singer he is a real revelation, a shy mountain of a man with a gorgeous voice capable of pain and joy, sometimes simultaneously.

When you watch a Los Lobos show, you are taken with how clearly each musician is listening to the other musicians and adjusting their playing in and out of the melody around each other as if they are engaging in an intertwined musical dance.

The other thing you notice is that they’re still pushing themselves musically to find both new colors and moods from the older songs. Most bands forty years into their careers are just going through the motions, playing the hits like a jukebox for the crowd. Los Lobos shows, though, are a celebration of the power of music to continually reinvent itself as the musicians weave and out of each musically in new arrangements pushing each other to find something new out of the old songs.

They still play with a power and a passion belying their years which was testified to by the two sets they played to appreciative crowds in Annapolis, Maryland at the Ramshead on Feb 27. I saw the late set (musicial tip: always hit the late set for any band playing two sets) and once again they did not disappoint.

They played a roughly one hour forty-five minute set that covered their entire career and jumped in and out of every style and genre they play, with maybe a slight emphasis on the jazzy side of the blues. The highlight to me was a showstopping version of the Billy Myles blues standard “Have You Ever Loved A Woman” made popular by Freddie King in the early 1960s, with a solo by Hidalgo that figuratively nearly caught his guitar on fire.

Other highlights were “I Can’t Understand”, “Maricela”, a really nice ten-minute version of the Grateful Dead’s “Bertha”, and every song where Hidalgo played accordion. He has to be the best accordionist in the blues/roots scene.

Catch Los Lobos when they come to your town. They are true American originals.

Below is a clip from the show with Rosas doing lead on a cover of “Papa Was A Rolling Stone” then “I Can’t Understand” followed by Hidalgo taking the lead on “Down On The Riverbed”.

Scottish indie rockers Idlewild return with their eighth album – Everything Ever Written.  Since their last album, frontman Roddy Woomble released his second and third solo albums which disappointed (his first was superb) so expectations were low for Everything Ever Written. Instead they have delivered an excellent album which mixes the best of Woomble’s solo folk work with Idlewild’s familiar rock.

Collect Yourself is a good rocky opener and is followed by single release Come on Ghost. The single was enjoyable, and it was good to hear Woomble’s distinctive voice back once again on an Idlewild song. But it sounds poorer when heard in the context of the album; it lurches along at an uneasy pace and is easily surpassed by other tracks on the album as a single choice.

The standout track, and obvious single choice, is Nothing I Can Do About It. This is Idlewild doing ‘big music’ and doing it brilliantly. Big guitars, galloping drums, some Elbow-esque strings and a sprinkling of piano all add up to a huge sound, but the female backing vocals are what really elevate the song, in the choruses and the wonderful “ooh ah, ah, ah’s” in the outro.

The second highlight is (Use It) If You Can Use It. This is one of a couple of tracks where Woomble’s voice has a much more laid back quality than usual, but still manages to retain his distinctive tone. The song has shades of The Charlatans’ North Country Boy, which is a good thing, and it has an epic playout, an almost live jam affair, with funky bass, soulful keys, piano, horns, squealing guitar, and maybe even the kitchen sink in there somewhere.

If you’re still looking for the Idlewild of old, look no further than On Another Plant, the rockiest track from the collection which burns out beautifully.

Lyrically the album is more mature than before, no doubt down to the band nearing middle age. There are songs of regret and bitterness, beside songs about accepting and even embracing old age. Some of the more obvious examples include “You know I worn out my ambitions, I soaked them in wine”, ” In my dreams I am always young”, “Do you ever get the feeling that I made important decisions far too late in life” and the simple but effective chorus “There’s nothing that I can do about it”.

I don’t ‘get’ all the lyrics though, and I wish I could figure out Radium Girl, because it’s a great song which adds to a strong finish to the album, which includes the atmospheric piano and vocal number Utopia; the perfect ending to a highly enjoyable experience.

Follow See The Sun In Wintertime on WordPress.com
Join 258 other followers