Wayne Coyne and merry pranksters The Flaming Lips create day-glow art out of artifice in an all-comers party in Washington DC on the heels of their strongest album in years.

I’ll be honest right up front – over the 30-plus years that I’ve known about the Flaming Lips I’d liked and loathed them in equal measure.  From their ragged early years as an Oklahoma-based indie band through to their early 1990s alternative breakthrough with “She Don’t Use Jelly” to 1999’s unlikely fluke hit “Do You Realize?” and their commercial apex during the early 2000s, I could never quite tell whether the Lips, and leader Wayne Coyne in particular, really believed what they were putting out or whether they were putting one over on the audience.

It’s the problem that I’ve often had with self-consciously “arty” projects, whether in music, art, theatre or literature. I tend to prefer Serious Music by Serious Musicians, who in my mind are usually distinguished by their all-black outfits (with flannel as an allowed exception), dour music and sour expressions.  I have trouble trusting music made by people who by mocking their music, and who actually seem to be having fun (!) playing it, seemed to me to be mocking their audience along the way.

After seeing the Flaming Lips at the 930 Club in Washington DC on their Oczy Mlody tour, though, I’ll never think that way again.  On a recent interview on the “Nerdist” podcast Doc-Brown-coiffed bandleader Wayne Coyne described the experience of how much nicer it is to have someone scratch your head than to scratch it yourself, and I suppose having your brain scratched by a lover is as apt a metaphor for a Flaming Lips show as I can come.

The Flaming Lips’ shows are not really a concert in a conventional rock sense, they are a Communal Event Shared By Like-Minded People, a party where the hosts just happen to be playing music for a couple of hours. Their albums don’t even begin to scratch the surface of the wild party that the Lips throw on stage.

From the opening salvo at the introductory “Race For The Prize” where they blew the giant confetti cannons spraying the crowd and releasing two nets filled with giant beach balls onto the crowd (that managed to stay inflated for about half the show) you know that you’re in for as much spectacle as music.  Every song has a visual setpiece and most have props. Here are a few examples… 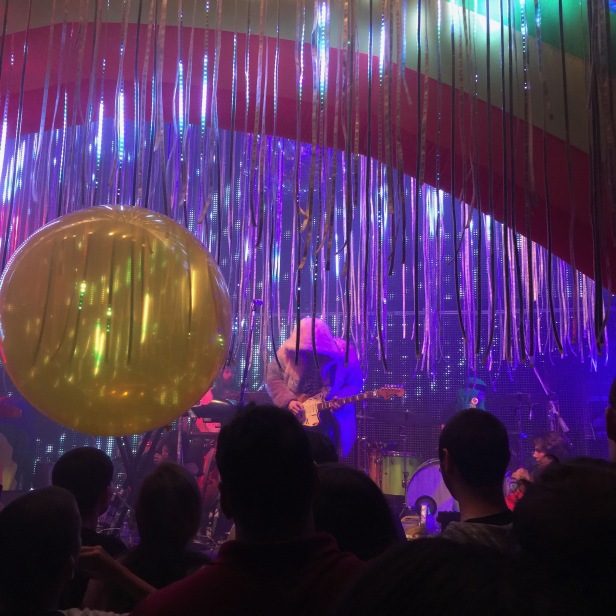 The secret weapon is the see-through curtain created at the front of the stage by a draping of beaded ropes that are multicolored and segmented to create a different mood for each song while still allowing you to see Coyne, who appears as part shaman, part wild-haired Professor, and part Dr. Who, who goes through multiple outfit changes as the show goes along, and while the rest of the band keeps to the background of the stage.

No Lips show is complete without outrageous props, and there were two at this show.  At the start of the third song, the pulsing, throbbing, totally-engrossing “There Should Be Unicorns” Coyne disappeared from the stage and there was an extended instrumental guitar intro where you could tell that something was brewing.  Then out of nowhere from off-stage-right, Coyne rode right through the crowd near the foot of the stage astride a giant mechanical unicorn, nearly trampling some of us in the process. You need to keep your head on a swivel at a Lips show! Coyne rode his mechanical mount to the middle of the floor and sang to the balcony and then rode it back off-stage as if it was just the most natural thing in the world.

What really changed my view of what Coyne was doing was seeing up close the beatific joy on Coyne’s face while he was singing. Here was a man in his 50s in an outfit that even Willy Wonka would suggest was a “bit much, really” riding a giant mechanical contraption and earnestly singing a song about why the world would be better if it contained unicorns, and I could see that he was absolutely committed to a truth he was seeking in the song and a conversation that he was having with the Universe.  He may have been riding a mechanical horse with a horn bolted to its head, but it was clear that this was not bull to him.  It was absolutely endearing to see how much he believed in what he was selling.

After that, I started to look for the truth under the artifice, and I started to realize that the props, visuals and distractions were all intended to disguise the deep emotion in some of the songs.  Coyne went as far as to drop the mask for one intro when he said, paraphrasing, that he wanted us to all enjoy the party, the lights, props and other distractions, so that the seriousness of the song lyrics wouldn’t make us sad.

Many of the lyrics are so personal or elliptical that I honestly didn’t quite get it all, but I could tell that he meant them and some had real emotional impact on him.  On one song, where he was wearing an absurd hoodie with flesh-colored protuberances, he drew the hoodie down as tight as he could and you could actually see through the strobe-curtain that he was crying while he sang.

Then came my favorite part of the show.  At the start of a faithful cover of Bowie’s “Space Oddity” a couple of techs started inflating a giant plastic bubble. The long-time faithful (along with the rest of us who’d seen the clips on You-Tube) all knew what was coming but you could hear audience members around buzzing “You don’t really think he’s going to…No, he can’t possibly…is that thing safe?”.  Sure enough, when the bubble finished inflating Coyne got inside and nonchalantly zipped himself inside (“nonchalantly” being the only acceptable way of zipping yourself inside a giant inflatable bubble) and at the appointed time he just rolled off the stage onto the arms of the waiting crowd in perhaps the most unusual demonstration of crowd surfing that I’ve ever seen.

As with the unicorn, he rolled himself completely over the audience to the foot of the balcony, and sang the balance of Space Oddity as if world peace depended on it.  When he’d had enough he rolled his way back up to the stage and climbed out of the bubble as if it was the most normal thing in the world.

Here’s something that should be on everyone’s bucket list to see once….

Not everything went smoothly. During one song midway through the set, there was a giant painted rainbow prop that was supposed to ascend from beneath the stage being pushed up from below by two stagehands.  In what looked something a bit like an outtake from “This Is…Spinal Tap” the rainbow got stuck partway and you could see the stagehands furiously trying to set it free. After a good 30 seconds of working with the rainbow, it finally loosened and ascended to its rightful place framing the song right before the end.

In the end of the song Coyne gave a little impromptu speech about how what we had just witnessed was a metaphor for life, in that because there was truth and beauty available in life that each of us owed it to the Universe to never give up seeking for that truth and beauty in the trash around us.  He ended the oratory with a sweet and plaintive entreat to  “Never doubt the rainbow, man…” at which point my stony heart finally melted and I gave in to the rest of the experience.

I’m still not sure that all Artifice is in fact Art, just as I’m not convinced that metaphorical truths are deeper than straightforward truths. I will however agree with Hamlet’s words: “There are more things in heaven and earth, Horatio, than are dreamt of in your philosophy”…

If you can’t see the Flaming Lips on tour, be sure to stream/download their new album Oczy Mlody (Polish words that Coyne pronounces “Oatsie Melowdy” and which literally stands for “Eyes Of The Young”).  In a world where it seems like there are only six different songs right now, each recycled hundreds of times, this is unique music coming from a single vision.