Soul Meets Body as Benjamin Gibbard and the iconic indie-pop band enthrall the faithful in a sold-out show at Red Rocks.

Red Rocks Amphitheatre is one of America’s very best concert venues and a personal favorite. Just outside Denver, Colorado in the town of Morrison, Red Rocks is a natural amphitheatre with sandstone walls that create a tremendous sound environment and is hollowed out with great sight lines to the stage.

On a gorgeously clear mid-summer night under the stars on July 15, 2015, the stage was set for a magical night with Death Cab For Cutie in front of an ecstatic crowd of mostly young, mostly female adherents after an enthusiastic opening set by tUnE-yArDs and their blend of polyrhythms and vocal effects.

DCfC is an excellent and underrated live act and their fans are some of the most ardent in music. They seem to fill the same places emotionally to their audience that The Cure filled to an earlier generation. On their first major tour since 2012 to promote the new outstanding “Kintsugi” album, DCfC drew from all stages of their surprisingly long career and rich catalog (eight studio albums) going all the way back to 1998’s Something About Airplanes.

Ben Gibbard’s voice, equal parts Neil Young and Neil Finn, is a wonder – plaintive, open and expressive while simultaneously holding a hint of bitterness and threat that combine to make a romanticly dangerous, or dangerously romantic, combination of obsessivesness, melancholy and sweetness. The lyrics are thoughtful, literate and full of longing but with a bit of an edge that keeps them more edgy than maudlin.

In concert, Gibbard bobs and weaves like a boxer in front of a double mike setup that includes his vocal looping kit used on tracks like “You Are A Tourist” and periodically moves back to the piano. Nick Harmer on bass prowls his part of the stage like a panther and Jason McGerr on drums pounds out a surprisingly sturdy rhythm for a pop band. 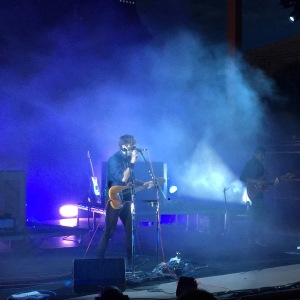 Dave Depper on guitar/keyboards and Zac Rae on keyboards/guitar fill out a deceptively lush sound. Gibbard keeps the between-song patter to a minimum which services the carefully crafted set list to move between moods and emotions without a break. His playing showed no ill effects from the wrist injury he suffered this spring.

Kintsugi is an ideal metaphor for DCfC’s music, so ideal that if it didn’t already exist someone would have had to invent it. Kintsugi is the Japanese art of repairing broken pottery using gold, silver or platinum as the interstitial. The idea is to celebrate brokenness and highlight the beauty of being broken. We are all broken people in one way or another and kintsugi highlights the beauty of the brokenness unique for every individual, telling the story both of the breakage and the repair.

Without being too heavy-handed here, that’s a great description of DCfC’s songs as well, particularly the ones on Kintsugi.   As Gibbard approaches 40, it’s hard not to focus on whether the lyrics apply to Gibbard’s recent divorce from Zooey Deschanel and the rebuilding of his life since then, but the tie is inescapable on lyrics such as “Black Sun“‘s line “How could something so fair/Be so cruel”.

Although Kintsugi’s songs are largely somber, melancholy and wistful, there is also passion and beauty in the lyrics, music and singing that both revels and reveals pain while searching for beauty. This is Night Music that you play to acknowledge Pain before the Dawn you know is coming.

Here’s an example from the show off Kintsugi, the understated “Little Wanderer”…

DCfC’s music is more complex and brooding than typical indie-pop and I was impressed that the crowd seemed to fall right in on some of the complex pieces. An example is “I Will Possess Your Heart”, to me one of the best songs of the past decade and which opens with 2:00 of feedback and squall led by Gibbard with Harmer locking down the bass, followed by another 2:00 of piano moodsetting over the driving beat before any vocals kick in.

I Will Possess Your Heart builds a tension/release like the best of drone blues from the American South with the pressure gradually building and building to a fever pitch before the constriction gets released as the vocals begin, after which the song is actually just beginning. Not your typical radio-friendly indie pop, and it really is something of a revelation live…

Other highlights of the show included a skronking version of “The New Year”, the driving pulse and riffs of “You Are A Tourist”, and the pallet cleansing of the acoustic interlude for “I Will Follow You Into The Dark”, to which the entire audience sang along note for note like it was a Dashboard Confessional emo concert.

Videos for all three songs below:

Other than I Will Possess Your Heart, the high point for me was their usual set closer, a transcendently romantic and crystalline version of “Transatlanticsm”. Transatlanticism is one of my all-time favorite songs, and I’m always amazed by how moving the music and simple lyrics like the repeated “I need you so much closer; Come on now” refrain can tug at your heartstrings.

No video of Transatlanticism here because I put the phone down, got in touch with my inner tween girl and lost myself singing along with the crowd. Every once in a while you have to do things like this to not only remind you that you’re alive, but why you’re alive.

As they left the stage at the end of Transatlanticism, Gibbard flipped me his guitar picks and the evening was complete.   The teenage version of me would have been happy to skip life and proceed directly to Heaven from that point. No-longer teen-age me wouldn’t quite go that far, but it was still a reminder of the power of music to move the spirit. We all need that reminder from time to time. Thank you DCfC. 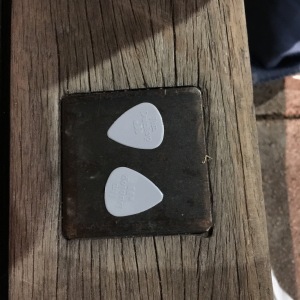 Follow See The Sun In Wintertime on WordPress.com
Join 258 other subscribers