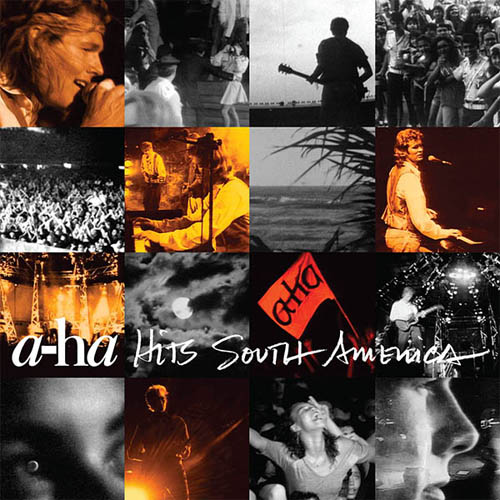 a-ha’s contribution to this year’s Record Store Day was a mini album titled “Hits South America”, where we are brought back to a show in Brazil during the summer of 1991. These recordings are previously unreleased, and a sweet package for those of us who are fond of the 90s rock version of a-ha. This album is only available on vinyl.

The previously released video/DVD “Live In South America” is from the same tour that “Hits South America” stems from. Fortunately this EP has no overlap with the video, which was released on DVD for the first time ever as a bonus disc on last year’s deluxe edition of “East of the Sun, West of the Moon.”

“The Blood That Moves the Body” is the opening track, and this is an excellent version. Paul Waaktaar plays a driving guitar, infusing the song with a strong rock element which gives a totally different experience than the studio version from “Stay On These Roads.” I definitely think the rock expression of the 1990s suits the band best.

The band had a fantastic rhythm section at this time, with bassist Jørun Bøgeberg and drummer Per Hillestad contributing a very tight and organic sound. For this reason alone it is a shame that we don’t have a complete concert recording from the period 1991-1994, but fortunately we do have some things to enjoy from this period. With the release of “Hits South America” we are a lot closer to having live versions of all the songs from the 1991 tour, but a few are (of course) still missing.

“Manhattan Skyline” has always been a highlight in a-ha’s catalogue, whether studio or live. This time we get a version with more of the urgent Waaktaar-guitars, whilst Magne Furuholmen adds the usual atmospheric keys on top. Morten Harket is just the right amount of ballsy up front, and all in all this leaves us with the toughest version of this great song to date. Just to hear Paul take off in the solo is worth this album alone.

“You Are the One” is another song which ends up quite different than the studio version, but not quite as raw as some of the other tracks. It features some saxophone solos from Sigurd Køhn, and otherwise the well-known cheeryness of the song is more than present in this version as well.

The guitars are back again on “Stay On These Roads”, both energizing the song and contributing a lot of spice on top of it in the process. Still, this beautiful ballad never loses its core melody and is a relatively faithful rendiion. It has always been a showcase number for Morten’s vocal, but then again, which song isn’t? It ends up being a great combination of the original expression with some more interesting things also happening here and there.

It all ends with “Hunting High And Low.” The acoustic guitar is brought out, and Magne plays some hauntingly beautiful piano lines on top. Morten nails it as usual. After a while, Paul brings in the electric guitar again, giving this song some of the same embellishment we saw on “Stay On These Roads.” And, of course, we get to hear some 200,000 Brazilians sing the chorus in perfect unison. Goosebumps. Pure goosebumps.

The only problem with “Hits South America” is that it only contains five tracks. You’ve eaten the entire meal, but you’re still left hungry. In any case, this is a-ha on top of their game, and the combination of melodic gens and Paul Waaktaar-Savoy’s rock guitar is nothing less than phenomenal.

Follow See The Sun In Wintertime on WordPress.com
Join 258 other subscribers