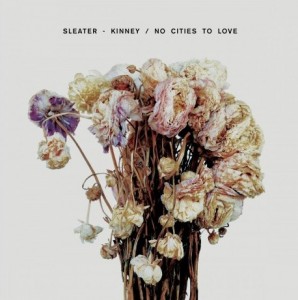 Sleater-Kinney return after a decade’s hiatus with the best album of their career.

When a band reforms after a long layoff, there’s always a bit of trepidation. For every example of a successful reunion that results in an album that’s a welcome addition to a band’s canon, such as Big Country’s “The Journey” or Toad The Wet Sprocket’s “New Constellation”, both from 2013, there are many more examples where the band was obviously unable to catch the previous magic and frankly embarrasses themselves.

Rarest of all is the case where a reunited band creates the best work of their career, which is exactly what Sleater-Kinney have done with their outstanding new album “No Cities To Love” on Sub Pop. “No Cities” is the most assured, confident and accessible album of their career, and may stand as a career-defining work for this three-piece from the Pacific Northwest.

Background: Sleater-Kinney was the most proficient and well-known band to come out of the 1990s seminal “Riot Grrrl” movement. “Riot Grrrl” was a broad label applied to a group of post-grunge female alternative bands, primarily based out of the Seattle scene such as Sleater-Kinney, Bikini Kill and Bratmobile. Riot Grrrl was as much a political movement as a musical one, featuring a feminist political stance and a DIY aesthetic.

Sleater-Kinney (named after an Interstate exit near Lacey, Washington where the band practiced) consists of Corin Tucker (vocals and guitars), Carrie Brownstein (guitars and vocals) and Janet Weiss (drums). Sleater-Kinney released seven well-regarded albums between 1995 and 2005 starting with an eponymous debut in 1995 and ending with “The Woods” in 2005. After breaking up, Tucker continued to play with various bands, and Brownstein/Weiss went on to form a band called Wild Flag that released a well-reviewed album in 2010. Of course, the most visible project from any of the members has been Brownstein’s turn as half of the creative team behind the satirical “Portlandia” TV series with her partner Fred Armisen.

Always a critical favorite, their influence was disproportionate to their commercial success, with their highest charting album being “The Woods” at number 80 on the US charts. However, their influence was felt throughout the indie/alternative scene throughout their career, influencing bands from L7 and Hole to No Doubt. Sleater-Kinney featured the interplay between Tucker’s dramatic vocals, variously shouted, yelped and sung at top of her range reminiscent of PJ Harvey, over Brownstein’s angular, skittering and alternately heavy and sludgy guitar (and occasional vocals) and anchored by Weiss’s solid and metronomic drums.

I admit I was slow in climbing on the bandwagon. From the start, I recognized what they were attempting to achieve, agreed that they were hitting their mark, and that what they were doing had value. Truthfully, though, although I liked individual songs from them I never really clicked on an entire album from them until their fifth album “All Hands On The Bad One” from 2000. I suppose that I liked the idea of early Sleater-Kinney better than the actual thing until I finally caught up to what they were (and now are again) doing.

I saw them live once, and they were just a crashing wall of sound. I only really remember two things: Janet Weiss bashing the drums like a maniac, beating them as though they’d crashed her car, and the way that Brownstein/Tucker traded off lead guitar licks, and without a bass player in the band one of them (usually Tucker) would occasionally play bass lines on the guitar. I liked that – it’s always good to remind bass players that they are optional. Here’s a linked overview that gives you some of the history if you’re unfamiliar with them:

Which brings us to “No Cities To Love”. This album is a 33-minute, 10-song revelation, if not revolution, full of ferocious and inventive riffs, licks and melodies. The guitar tones draw as much from Gang Of Four, Wire, and Television as they do anything from 90s or 00s alternative.   The guitars can veer from Sabbath-esque sludge to post-millenial Futureheads/Editors within a single song, reaching all the way to pre-synth Devo or early B-52s on occasion. Tucker’s (and occasionally Brownstein’s) quasi-operatic vocal prowess is undiminished, Weiss’s drumming is outstanding, with lots of quirky polyrhythmic touches to complement her jackhammer style.

The lyrics show a mature self-awareness and multiple shadings whether discussing domestic life and the struggles to make ends meet – and also maybe also the price of fame – (“Price Tag”) or “Fangless”’s kissoff to an unnamed person that also hints at regrets for their past (“Where’s the evidence, the scars, the dents That I was ever here?”). Perhaps the most curious lyric is on the title track. Given the identity that the band has with the Pacific Northwest, it’s strange to hear them sing “There are no cities, no cities to love; it’s not the city, it’s the weather we love!” The implication is that all cities are the same, it’s only the geography that matters, but given how specifically they have been tied to Seattle in the past and of course now Portland due to Portlandia, I don’t quite get the lyric.

The album leads off with “Price Tag” which sets the tone for the full album, full of spiky, quirky and occasionally atonal guitar lines, straining vocals and a bludgeoning drumline. “Fangless” is built around a classic S-K swirling guitar figure. “Surface Envy” (featured live on their recent Conan O’Brien performance) has demented guitar accents that squonk and squeal and a descending guitar line over a classic alternative sing-along chorus.

“No Cities To Love” is perhaps the most memorable song on the album. Over a propulsive beat and bass-line played on guitar and another bouncy, spiky guitar riff, the song has a great bridge and chorus that is instantly memorable and will have you humming it all week. “A New Wave” and “No Anthems” complete a strong three-song mini manifesto at the center of the album. Brownstein sings the galloping beat of “A New Wave” with punky enthusiasm “It’s not a new wave it’s just you and me….invent our own kind of obscurity” and it’s clear that although she’s become best known as a comic actor on Portlandia she can still bring the noise.

Here they are doing “A New Wave” on Letterman:

Follow See The Sun In Wintertime on WordPress.com
Join 258 other followers